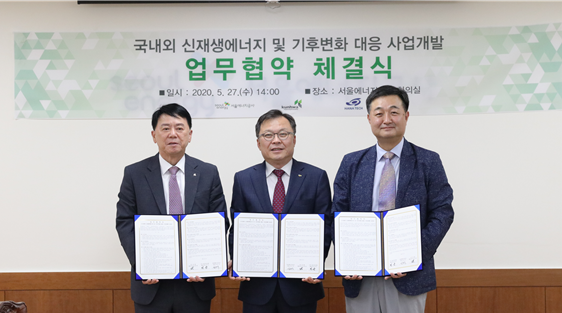 The agreement was pushed to establish an organic cooperative relationship on the development of domestic and overseas projects by pushing for greenhouse gas reduction projects to cope with renewable energy and climate change. The landfill gas power generation project is a project to collect, incinerate and develop landfill gas at landfill sites, and it is a project to acquire carbon emission rights by reducing greenhouse gases and sell additional electricity. The system uses methane gas, which accounts for about 50 percent of landfill gas, to generate electricity.

The corporation also plans to carry out the Cookstove project. This is a CDM project that provides free cookstove to developing countries and secures carbon emission rights in recognition of greenhouse gas reduction as energy efficiency has improved.

Cookstove is a cooking tool that uses firewood. It is energy efficient. Also, it can reduce fuel use by 20 to 30 percent, secureng about three tons of carbon credits per cookstove.

The South American landfill gas project in Nicaragua is the first overseas solar power project to reduce greenhouse gas emissions, a new business model for the corporation, said Kim Joong-sik, president of the Seoul Energy Corporation. This will serve as a cornerstone for spreading the city's energy policy abroad.

Meanwhile, Kunhwa is a construction engineering company established in 1990 and has carried out licensing and basic design of solar power generation projects such as Sangtaedo, Sinan (150MW). HANATECH was established in 2004 as a company that specializes in developing and manufacturing gas engine generator sets and exported landfill gas generators to the U.S. and bio gas generators to Vietnam. In particular, the company established a local subsidiary in Myanmar this year and is pushing for a landfill gas project in Yangon, Myanmar.